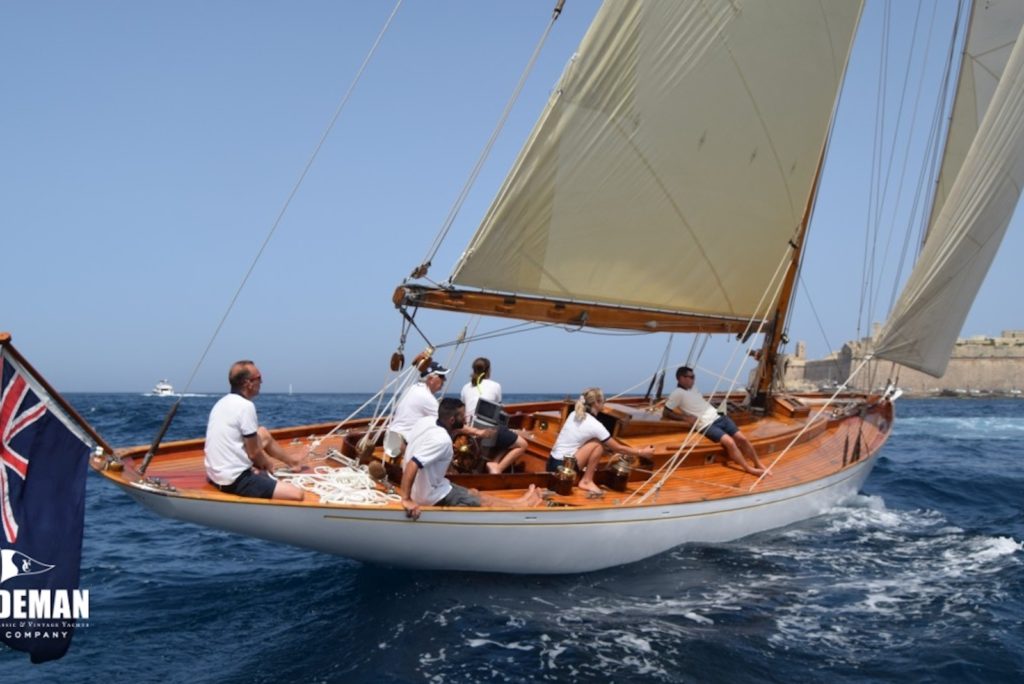 The last yacht launched by the famous Fairlie yard during the lifetime of her designer William Fife III, SOLWAY MAID has only ever had two owners, and it shows in the remarkable level of her authenticity. Conceived and built speculatively as a “stock boat” – and thereby incorporating everything Fife thought best in such a yacht, unsullied by rating rules and owners’ wishes – she was advertised during the months leading up to the Second World War as a “Fast cruiser suitable for ocean racing”; it’s hard to think of a better description.

In the dusk of an October evening in 1940, in a world which had gone mad, on a river which had run to war and where every ship was painted the dullest shade of grey, the quiet, unceremonious launching of a sleek, white hulled, 52 ft yacht at the celebrated slipways of William Fife & Son would have passed off with little fuss.

And yet it must have been a most poignant moment for her creator, William Fife Junior. He was in his 84th year, last of the line – the third and final generation of a Scottish yacht-building dynasty founded in the early 19th Century by his grandfather on the shallow beach at Fairlie on the Firth of Clyde, Scotland. His yard had been requisitioned by the British Admiralty and, by the time the war clouds had cleared, Fife had already taken his final departure, passing away at the age of 88 in 1944. Thus, the final launching by William Fife & Son: yard number 825 became SOLWAY MAID, named after the cruising grounds of the south coast of Scotland beloved of her purchaser, Carlisle flour miller F. Ivan Carr.

Just two days after launching, her deck of lustrous yellow pine hidden by a coat of grey camouflage paint and the identification “A32” written boldly on her still-white topsides, she set sail on her maiden voyage to the Solway Firth port of Kirkcudbright (pronounced Kir-koo-bree and still carved in her shapely counter) which was to be her home port until hostilities ceased.

As it turned out, her wartime lay up was shorter than expected and SOLWAY MAID began her sailing career in 1944 as the training vessel for Carlisle Sea Cadets, sailing out of Silloth, Cumbria. It was the beginning of 30 years of cruising with friends in Scottish, Norwegian, Irish, Welsh, English and French waters for Carr, until he sadly died in 1974.

There followed a period of 14 years indoors layup until she was purchased in Scotland by her present and only the second owner in 1987. The 1988 and ’89 seasons were spent gently cruising the Clyde in 1974 condition, then she emerged from a major refit in 1990 looking like the yacht Fife launched in 1940. After a 50th birthday party at Kirkcudbright, on the Solway Firth, her life as a fast cruiser began once again, interspersed with attendance and many podium places at classic yacht regattas: from the Clyde in Scotland to Spetses in Greece – including overall wins at the Conde de Barcelona Regatta, Palma de Mallorca, and at the first Fife Regatta – while clocking up thousands of passagemaking miles. In fact she has attended every Fife Regatta: 1998; 2003; 2008; 2013; and is the perfect yacht to take to the next one in 2020. In subsequent years her beautiful, long overhangs and relatively narrow beam compared with American designs hindered her Mediterranean CIM rule regatta results, but the recent success of her big sister HALLOWE’EN shows how much the rule has been refined in recent years to become more inclusive. There is no doubt that this delightfully responsive and fast yacht has more podium places in her.

Crewed and maintained professionally since 1990, SOLWAY MAID has gone through three major refit periods in her lifetime. The first, 1988-1991 in Scotland, whilst always sailing by summer, involved structural work, major paint and varnish stripping and refinishing from keel up externally and internally and mast and spars, re-engining, rewiring, refitted galley – in particular to incorporate a refrigerator – new rigging and new sails.

In the winter of 1998-1999, Cantiere Navale dell’Argentario replaced her galvanised steel floors with stainless steel in way of the 8 ton lead keel, two of her original bronze keelbolts and the associated lower planking.

In 2001-2002, after rig damage during the America’s Cup Jubilee Regatta, the top part of her original Fife mast above the hounds was beautifully reinstated by Harry Spencer following Fife’s specifications exactly.

The next major period of restoration was 2011-2013 at Imperia, Italy, where damage repairs from a collision incurred during Les Voiles de Saint-Tropez evolved into a major structural and cosmetic restoration, always keeping her as authentic as possible. 90% of her steel and American rock elm frames were replaced at this time, the steel with stainless steel, and the elm with oak.

← Latifa
Eilean →
We use cookies to ensure that we give you the best experience on our website. If you continue to use this site we will assume that you are happy with it.Ok