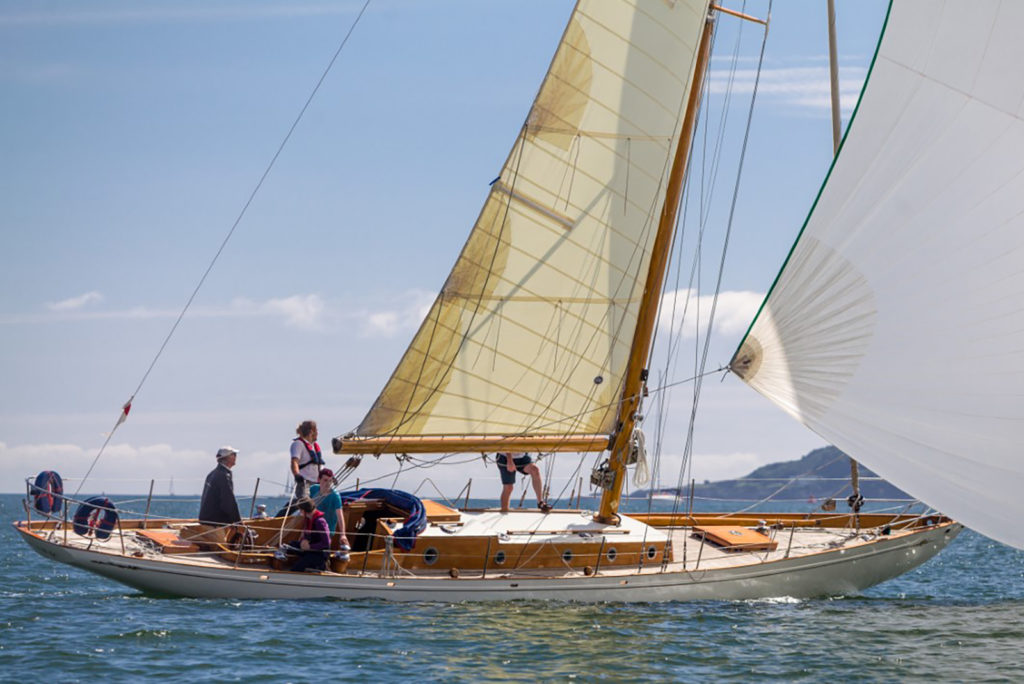 Construction Mahogany on oak, cedar under the waterline

This yacht, built at Fairlie Shipyard in 1902 to the 36 ft Linear Rating Rule of 1900, as ENSAY was owned by J. Stewart Clark and was as far as is known, one of only four such on the Clyde. The other three EILEEN IV were owned by Sidney Mason, FALCON FIFE owned by Joseph A. Leckie and BARABEL owned by Charles McIver. ENSAY was built as a gaff cutter with a short bowsprit, carrying 1,620 sq ft of sail and 5 ½ tons of lead in her keel.

By 1908 she is shown on the Register owned by Arthur E. Nicholson and home port Queenstown. Then in 1912 she was sold to Mr. Atwell Allan and renamed SIBYL. She remains in the Register under his name until 1929 when there is a gap before she re appears in 1935 having been acquired by Mr. T. Goobie. It was he who had the bowsprit removed, shortened the boom by 6 ft and the gaff by 5 ft, reducing the sail area to 1,120 sq ft.

Post War in 1945 she changed hands again to Mr. Henry Donegan, Vice Commodore of the Irish Cruising Club – and much of the information contained in the ICC’s Sailing Directions is apparently attributable to his cruising SIBYL off the local coast. Meanwhile he had her measured up for her RORC rating (45) and raced her in the Kingston Cork Race. Sadly he was later to drown in an incident in which his dinghy capsized – he was a non swimmer. A similar occurrence overcame her next owner Mr McDonald – the yacht then passing into the ownership of his brother, who had no interest in boats of any sort and left her neglected for 2 years in Ringsend Basin, Dublin.

Around that time in 1950 her next owner was looking for a suitable boat and was shown a picture of SIBYL on a slip in Dun Laoghaire. He and his business partner Commander Jens Jensen were enthralled by the picture and quickly endeavoured to have her hauled out for a survey. They could find nothing amiss and promptly agreed to buy her for a price that wasn’t much more than the value of the lead in her keel.

← Rhona
Elise →
We use cookies to ensure that we give you the best experience on our website. If you continue to use this site we will assume that you are happy with it.Ok