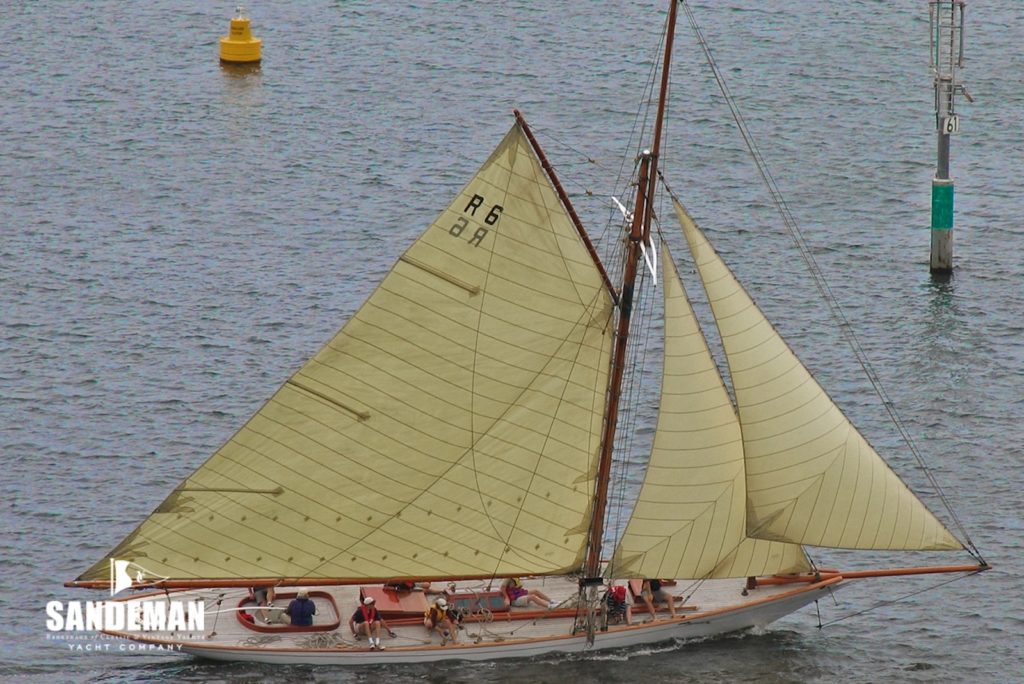 SAYONARA; Japanese for “goodbye” was commissioned by George F Garrard, then Commodore of the Royal Yacht Club of Victoria (RYCV) at a time when the largest yachts in Australia were to be seen there on Port Phillip Bay. Designed as a fast cruising yawl by William Fife III of Fairlie in Scotland – effectively a sister ship to his own champion CIREGO, SAYONARA was built A McFarlane of Birkenhead, Adelaide and launched in November 1897. She then cruised to Melbourne in record time.

In no time she proved to be invincible on Port Phillip Bay – a marvel in light weather in which she would ‘walk away’ from all opposition. Then a hard blow was struck when the various clubs decided to limit the sizes of yachts entering important races and regattas. This decision only affected SAYONARA and the ALEXA which had remained in Victoria for several years as there was no other competition for a yacht of her size in Adelaide.

In winter 1899, SAYONARA’s rig was altered to the alternative Fife plan of a top sail cutter, increasing her sail area to 2,079 sq ft. After being sold to Alfred Gollin around 1903, her new owner tried to stimulate New South Wales interest in an inter colonial challenge. This at first did not get approval as a larger type of yacht would have to be built than was then in vogue in Sydney. Finally a challenge issued through the RYCV was accepted by H Binney of the Royal Sydney Yacht Squadron (RSYS), his Auckland designed and built BONA having reputedly never been beaten. Mr. Gollin then donated a one hundred Guinea (£105) trophy for the series. From her moorings at St. Kilda, SAYONARA took 13 days to reach Sydney in light, fluky conditions. The three heat series in January 1904, was closely contested with SAYONARA winning the first and final heats, so winning the Cup. Alfred Gollin then offered back the Cup as a perpetual trophy to be called “The Sayonara Perpetual Challenge Trophy” for competition between Victoria and New South Wales. Conditions were then drawn up for future competition on lines similar to those of the America’s Cup.

Victoria received and accepted further challenges such as in 1909; from the 19 year old THELMA owned by Lloyd Jones of the Royal Prince Albert Yacht Club. Once again SAYONARA was put up to defend – converted to her cutter rig again. After three most exciting and keenly fought heats, she won the Cup for another year in the safe keeping of the RYCV. In 1910 however SAYONARA had to concede defeat to CULWALLA III in another closely contested three-heat series and the cup finally found its way to Sydney. SAYONARA herself was sold to Sydney in 1912 where under several owners, she remained until 1997 to be purchased in a very dilapidated condition by a Melbourne syndicate and taken back there for an authentic and complete restoration true to original drawings.

← Jap
Rosemary III →
We use cookies to ensure that we give you the best experience on our website. If you continue to use this site we will assume that you are happy with it.Ok