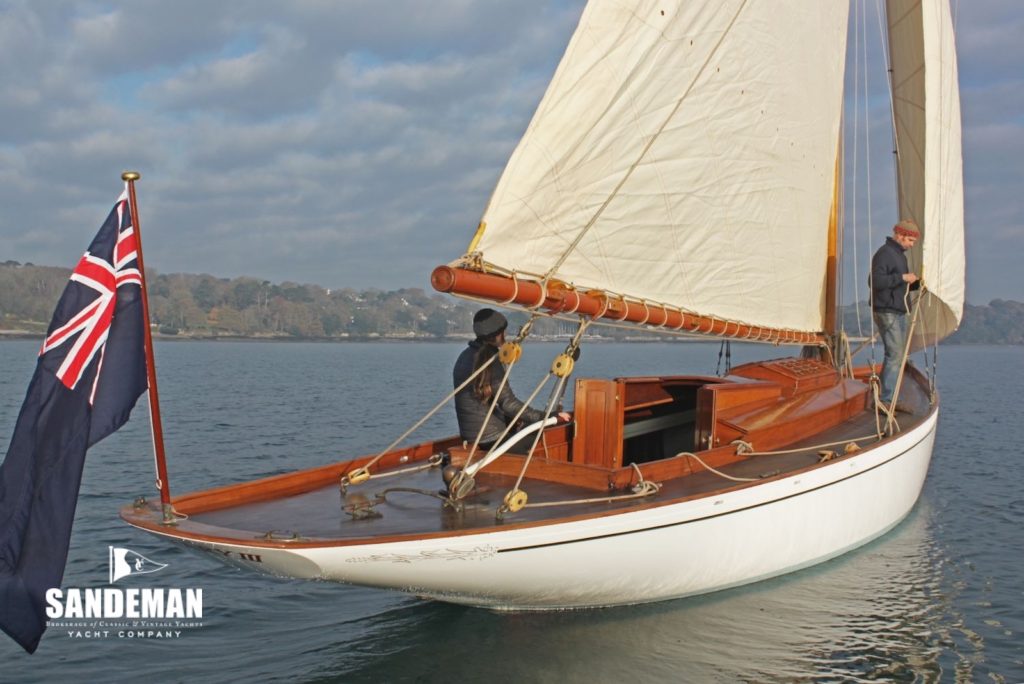 ROSEMARY III is a rare example of a smaller 1920s cruising design by William Fife III which he drew with a Bermudan sail plan – and as one would expect from this designer her lines and proportions are exquisite. The boat’s first owner had written to Fife ordering a yacht unhindered by any rating rule – he wanted fast and surefooted and that is what he got! Perhaps a victim of her own success the boat kept sailing – always bringing enjoyment – but working hard. Her virtues nonetheless apparent she was more recently purchased by a relative of William Fife III who set about a sympathetic and total restoration.

ROSEMARY III’s owners’ soulful treatment of this rebuild leaves the yacht looking as she would have done in 1925. Tempting as it might have been to add or change the original plans; they did not succumb to this and the boat sings – seeming much happier as a result – and what a result! To anybody wanting to own one of Fife’s creations this boat has it all and ultimately she is the most fantastic sailing boat – Fife refused to build any yacht that wasn’t “fast and bonnie” and he kept his word. It is also said if he ever designed a boat that wasn’t a work of art, there is no record to be found of its existence.

Built over the winter of 1924/25, her design is judged to be a development of Fife’s Dublin Bay 25 but with longer overhangs and on very similar lines to the much larger CAMBRIA.

William Fife is of course recognised as the architect of some of the most stunning classic yachts on the water by which others are judged. The majority of these spectacular big yachts with their uniformed crews cost a lot to run but all can recognise the importance of the investment in sustaining our yachting heritage. Thus when these larger yachts had paid hands; this yacht was undoubtedly intended for an owner/skipper and friends – and built for local sailing in the Clyde and the West Coast of Scotland.

Commissioned in 1924, the first owner sold her on in 1929 and having developed his taste with ROSEMARY, then commissioned a larger 54 ft yacht from Wm Fife. ROSEMARY’s new owner then brought her to Devon. With then another short intermediate ownership she was sold on again in 1935 to remain with this owner for the next 35 years. A much later change of ownership in 1990 brought a move to Suffolk and an extensive refit.

The refit was followed by several years of very active sailing and racing including many French regattas and UK based events. These included the 5 yearly Fife regattas on the Clyde; so back in her home waters again – and after half a century she has raced in company with some of the most spectacular Fife yachts ever built – and moreover won her class.

Bought by the current serving Royal Navy owners in 2008, she sailed to Dartmouth to begin not so much a refit as a rebirth to produce probably the finest top pedigree yacht of her size, a process taking from 2010 to 2014 and has been completed by Butler and Co. The overall aim of this recent restoration was to return her to the original specification; those plans in owners’ possession – and to strengthen and repair the hull enabling her to continue for another 90 years. In addition to the hull restoration of which very little planking had to be replaced, the interior has been renewed in accordance with the original drawings and re rigged to the original Bermudian rig design with running backstays and new sails to fit.

← Sayonara
Rita IV →
We use cookies to ensure that we give you the best experience on our website. If you continue to use this site we will assume that you are happy with it.Ok