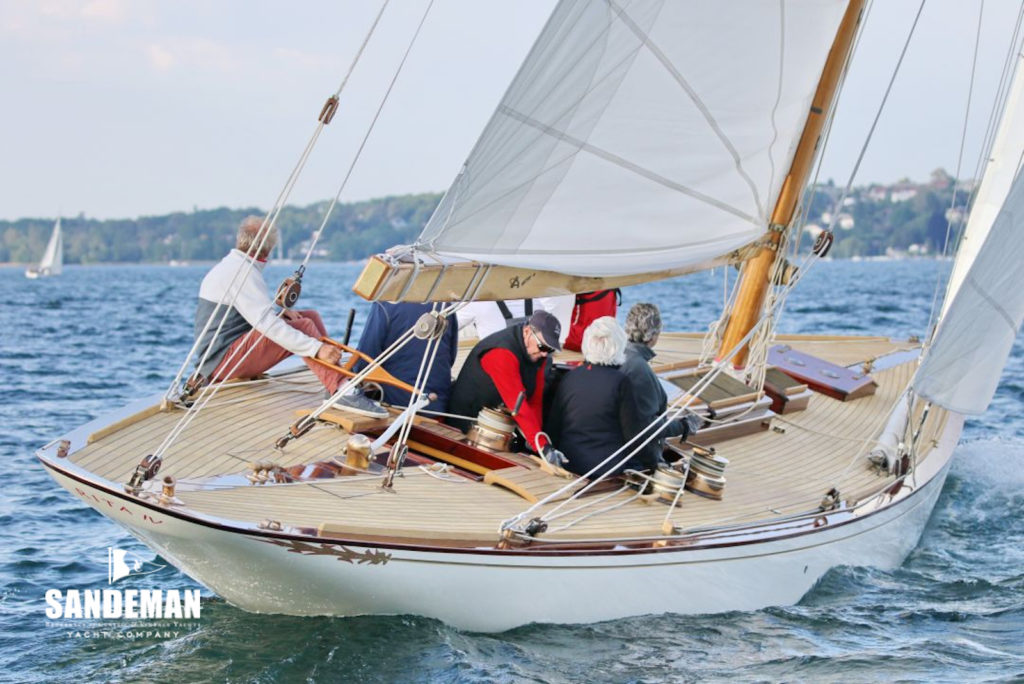 Could the International Rule 10-Metre be the most perfect of all the Metric classes? 58 ft/ 18 m of overall length is enough to wow – if RITA IV doesn’t already do that by looks – yet handy enough to sail and race with family and friends. And RITA IV brings that extra dimension of being a William Fife design, and, what’s more, a former Royal Yacht. Rescued from oblivion by a passionate syndicate of died-in-the-wool yacht racing aficionados and superbly restored at David Viera and Miguel Ministro’s Absolute Yachts, the result is structurally sound, fair, fast, and a true delight to the eye – in fact the definition of ‘Fast and Bonnie’.

The stronghold of activity and interest in the International Rule 10-Metre Class has always been the Baltic Sea and its associated coastlines out to Norway. In Denmark, royal approval and patronage ensured a strong 10mR fleet there through the 1920s and into the 1930s, often with six boats coming to the start line. Even as relatively recently as the mid-1980s, the register of Dansk Forening for Ældre Lystfartøjer (the Danish association for older pleasure craft) included four active 10mRs, though by then dedicated cruisers.

Construction of RITA IV was closely supervised by the King’s Sailing Master, Holger Rodkjær. Fife’s specs in metric units included 29mm mahogany planking of not less than 560kg/m3 density. Her inventory included two masts: the racing one of silver spruce, and a second made from Danish larch. Although Lloyd’s Register of yachts credits her original sail inventory to the English Ratsey & Lapthorn loft – a suit made in 1925, possibly for RITA III – the contemporary Danish press mentions only a suit by Johan Freytag of Copenhagen.

RITA IV was christened at launching by Queen Alexandrine on Saturday 17th April 1926 with her husband present, and Lieutenant John W. Thornycroft in attendance representing the parent company. Her maiden sail was two weeks later, on Saturday 8th May, from the yard via a cruise of The Sound to her mooring at Kongelig Dansk Yachtklub (Royal Danish Yacht Club)’s Langeline clubhouse just north of Copenhagen city centre. Accompanying the King were Rodkjær, yard director R.F. Newman, and the King’s long serving professionals Petersen and Pedersen..

RITA IV was raced by the King until the end of the 1929 season. A new Royal 10mR was commissioned from Johan Anker, and from the 1930 season RITA IV became KARAMA under the ownership of Danish shipowner A.P. Møller. Although it is believed that during 25 years with Møller KARAMA was mainly a cruiser, he kept her engineless. She remained thus until 1955 when a 6-cylinder Penta motor was installed in Denmark on transfer to her third owner, Pierre Poulain, whose oil tanker shipping line, Société des Transports Maritimes Pétroliers (STMP) was then a very significant client of A.P. Møller’s Odense Staalskibsværft shipyard on the Danish island of Fyn.

Yacht Club de France and Société Nautique de Marseille member Poulain had KARAMA shipped first to Le Havre, then to Marseilles for the start of a brief Mediterranean period. Her second French owner from 1960 was Le Havre shipping insurer, newspaper owner and politician, Yves Chegaray, but this seems to have been a short-lived affair: the 1961 edition of Lloyd’s Register of Yachts listed her as “Sold to U.S.A.”

She remained KARAMA on the West Coast under the ownership of prominent San Diego architect and SDYC member Richard George Wheeler, notably winning Ocean Racing Division Class A in the 1966 Newport to Ensenada Race at the expense of Arnold and Don Haskell’s Sparkman & Stephens 67ft yawl CHUBASCO. Then, from about the mid 1970s she became David Emery Baxter’s RAPIER out of Newport Beach and Morro, California. The colour 1980s photo here is from Danish yachting historians Bent Aare and Jan Ebert’s 1984 publication ‘Bogen om Meter-Bådene’ which recorded her then name as KALALAU.

By the early years of the 21st Century her structure had deteriorated to the extent that she no longer sailed. Yacht designer and classic yacht enthusiast Doug Peterson did much to stir interest in saving this Fife gem. By 2008 she had been shipped to Brian Pope’s Ocean Yacht Company yard in Cornwall, England to connect with a restorer. And three years later this happened: shipped again to Setubal, Portugal in 2011 for the beginning of the process by David Vieira and Miguel Ministro of Absolute Projects that has resulted in the magnificent yacht she is again, and is related elsewhere here.

Since 2015, as RITA IV again (it always remained engraved on her rudder head), she has been beautifying Lac Leman, Switzerland, and racing again to the manner born.

“We were perfectly aware that most of the wood and metal structures of RITA IV were beyond any possible repair. The main backbone structures, the stem, wood keel, sternpost, horn timber and deadwoods needed to be replaced.

“The upper clamp/ beam shelf also needed replacement: it was found pitted with too many holes and damage in the deck beam pockets. The lower longitudinal bilge stringers could be saved and were reinstalled after repairs.

“All the deck beams, cockpit and hatch carlins were replaced, not only for poor condition, but also because the deck layout had been changed over the years and the project was to bring RITA IV back to her original design.

“Most of the original Honduras mahogany planking above the waterline could be saved, though requiring “surgical“ restoration. Many of the original steam bent timber frames were in good shape; some needed restoration but we were able to re-use most of them. The main steel frames were all too damaged and corroded; none could be saved and the decision was to replace them with new main wood frames following Lloyd‘s Scantlings for the International Metre Classes.

“The lead keel was found asymmetric and was corrected. All the original bolts and screws were replaced by new ones in silicon bronze; all the copper nails (attaching the bent frames to the planking) were also replaced.

“The overall hull shape and geometry of RITA IV was checked and corrected to the original offsets.”

JOHN LAMMERTS VAN BUEREN OF PROJECT TIMBER SUPPLIERS TOUCHWOOD: “Touchwood was honored with the order to supply all wood for this project: the Sitka spruce for the spars, deck beams, stringers and shelf; the mahogany for the hull planking and the teak for the deck. We were lucky to source a superb, veneer grade Sipo mahogany log of 11 metres in length which was quarter-sawn to specification for the hull planking and superstructures. The result is structurally sound, fair, fast, and a true delight to the eye.”

← Rosemary III
Osborne of Wight →
We use cookies to ensure that we give you the best experience on our website. If you continue to use this site we will assume that you are happy with it.Ok