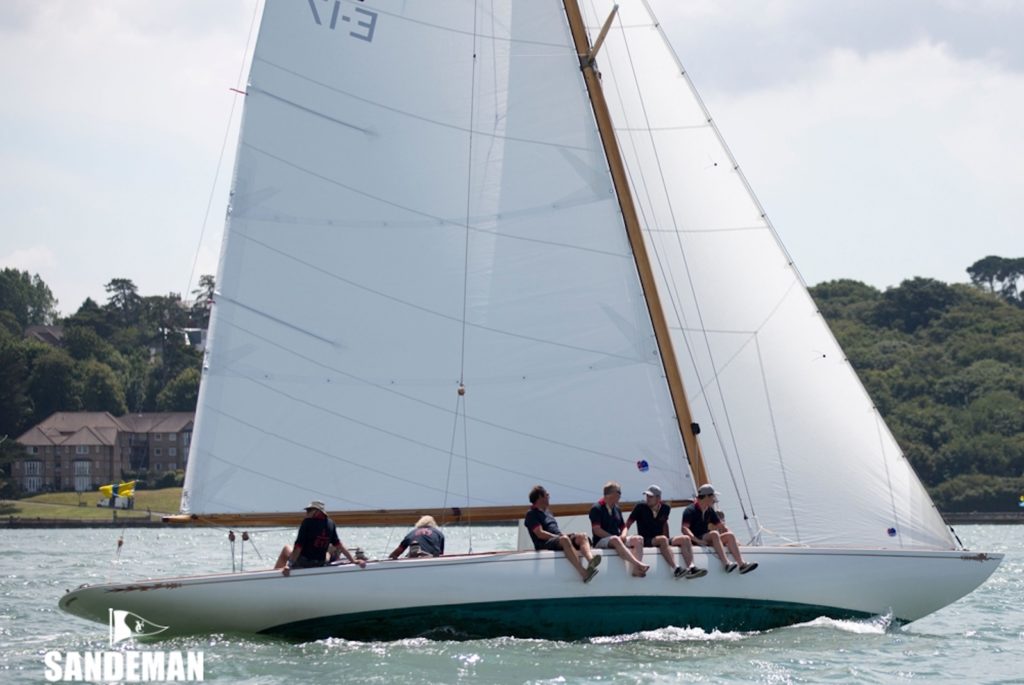 Notable not only for her royal commissioning, OSBORNE is practically the same design as Fife’s SIRENA built in Cannes in the same year for General Sir Arthur Paget. SIRENA was claimed to have been the most successful Second International Rule 8 Metre yacht on the Mediterranean – especially in light and moderate winds. OSBORNE has also won in the Mediterranean – meanwhile racing this season the boat has had a respectable initial showing at the Panerai Classic Yacht Regatta at Cowes.

OSBORNE was built in 1928 for HM Queen Victoria Eugenia of Spain, spouse of Kíng Alfonso XIII and was commissioned in 1929. The King’s abdication put paid to her originally intended career. Sold to French owners she was then to spend much of her life on the Atlantic coast of France; albeit in the mid 1930s a collision sent her to the bottom. She was successfully salvaged however and her new owner was careful to seek Fife’s opinion before spending considerable funds on her rebuild. His opinion was based very much on the characteristics and performance of her sister ship SIRENA. Anyway following this rebuild she has apparently been sailing successfully ever since.

In 1990 she was extensively modernised in Antibes under the supervision of Jaques Faroux. At this time the mahogany planking was sheathed in glass fibre externally and sealed with resin on the inside and a new deck, coach house and rig were also fitted. During the 1990s under the ownership of his Godfather, Eric Tabarly frequently raced aboard, the yacht oft winning her class. Later in 1997 under new ownership, Fairlie Restorations were commissioned to undertake a further refit that was to return her to her original appearance – and to sail as Fife had originally intended. In 2015 she was acquired by her current owner and now resides not so far from Osborne House on the Isle of Wight.

← Rita IV
Latifa →
We use cookies to ensure that we give you the best experience on our website. If you continue to use this site we will assume that you are happy with it.Ok