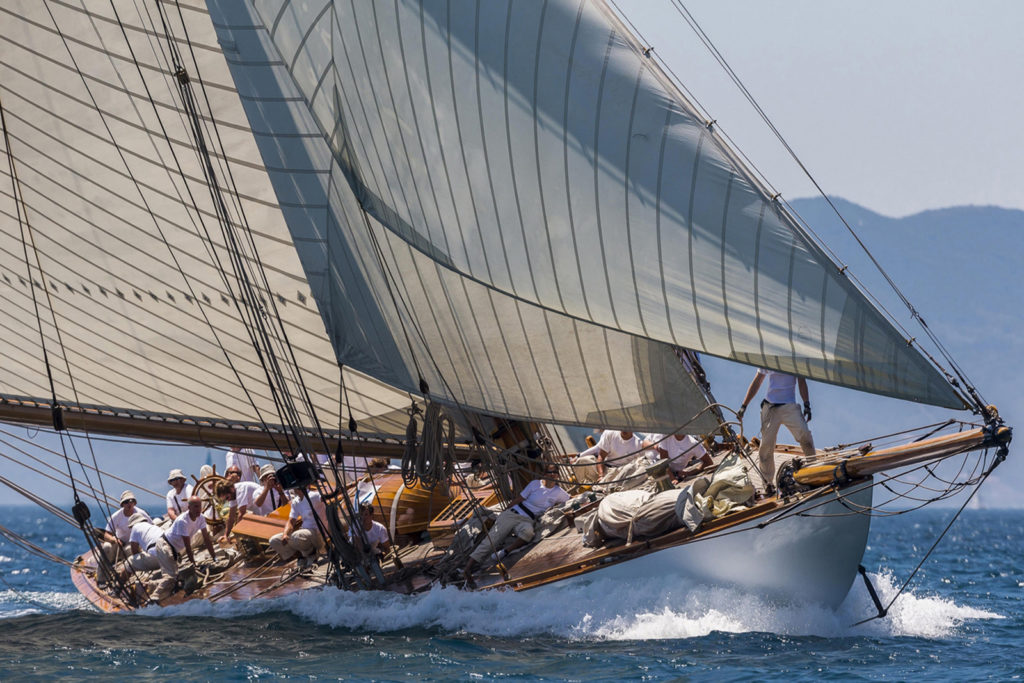 Mariquita – ladybird in Spanish and one of the most iconic yachts in the history of the sport is probably the last 19 Metre in existence and her career spanning over a century and involving something of a resurrection is one of the great maritime stories. Designed and built for industrialist Arthur Stothert by William Fife III, she was launched in 1911 at Fairlie on the Clyde. Fife’s wonderful design was of course fully complemented with the high build quality of his celebrated yard.

In 1915 she was sold, ending up in neutral Norway where she spent the war years. She returned to Great Britain after the war and was brought to West Mersea by Arthur Hempstead, whose firm undertook the decommissioning. Her fine mast was chopped away above the deck, her keel bolts let go and 40 tonnes of lead cut into scrap on the Mersea hard. The hulk of the once beautiful yacht was towed to Woodbridge on the Deben and in 1958 moved to Pin Mill, on the Orwell, remaining there as a house boat for some 30 years. Bow in to the river bank, moored with chains and supported between four very large posts, at high springs she would float, settling again – not always level as the tide went out.

It was from Pin Mill in 1991 that William Collier and Albert Obrist intervened leading to her landmark restoration at Fairlie Restorations. Taken round to the Hamble on a Thames lighter, work started on the restoration in 2001. After years of painstaking work the restored MARIQUITA finally appeared in 2004. With the restoration, her owners sought not only to save a unique yacht, but also the quality ethos to which she was built and raced originally in 1911. The MARIQUITA project was one of the most professional and well-resourced classic yacht programmes ever undertaken.

Following her re launch she started on a highly successful nine year campaign and was to star in numerous regattas, winning Imperia and looking great alongside the likes of the MOONBEAMs III and IV. Wintering in San Remo MARIQUITA then headed for Greece for 2 months of cruising and race training with the owner. She went on to attend five classic regattas, including the new Porto Rotondo event and the renowned Voiles de St Tropez. In June, 2008 she attended the Fife Regatta on the Clyde and then took part in other regattas on England’s south coast. 2011 marked her centenary with a busy race season with eight more regattas; Ajaccio, Antibes, Barcelona, Palma, Mahon, Monaco, Cannes and St Tropez. In 2012 MARIQUITA visited the UK again for the Westward Cup in Cowes, the Queen’s Diamond Jubilee on the Thames and the Pendennis Cup in Falmouth. She then returned to the Mediterranean for the end of season regattas there.

It was in 2012 however that MARIQUITA was unexpectedly offered for sale. The syndicate that eventually purchased her was helped somewhat by inheriting a number of her existing crew as where everything is done by hand on such a complex yacht working as a team is paramount. Of course it took time for the crew to bed in but by the fourth regatta in Barcelona the skipper George Newman was seeing signs of real improvement. Despite some dramatic conditions in both Mahon and Cannes and some very close racing with her great rivals MOONBEAM IV and CAMBRIA, MARIQUITA arrived in Saint Tropez for the final regatta of the season in good shape with six podium finishes under her belt. Her 2014 season ended with even better results – after winning overall the Big Boat class in the Panerai Grand Prix, MARIQUITA then went on to come second in Les Voiles de St Tropez, behind the mighty gaff schooner ELENA. She is now ready to be passed on to her next custodian.

Fast forward to 2015 to find MARIQUITA locking horns with ELEONORA and SUMURUN once again on the Solent coming out on top during an exciting week of sailing for the Panerai British Classic Week at Cowes. After recording three 1st and two 2nd places her owner and helmsman John Caulcutt was of course delighted with another regatta win saying “The crew have adapted to the windy and tidal Solent conditions this season with great skill. MARIQUITA has performed really well – I couldn’t be happier with another successful week on the water”.

← Halloween
Fairlie II →
We use cookies to ensure that we give you the best experience on our website. If you continue to use this site we will assume that you are happy with it.Ok