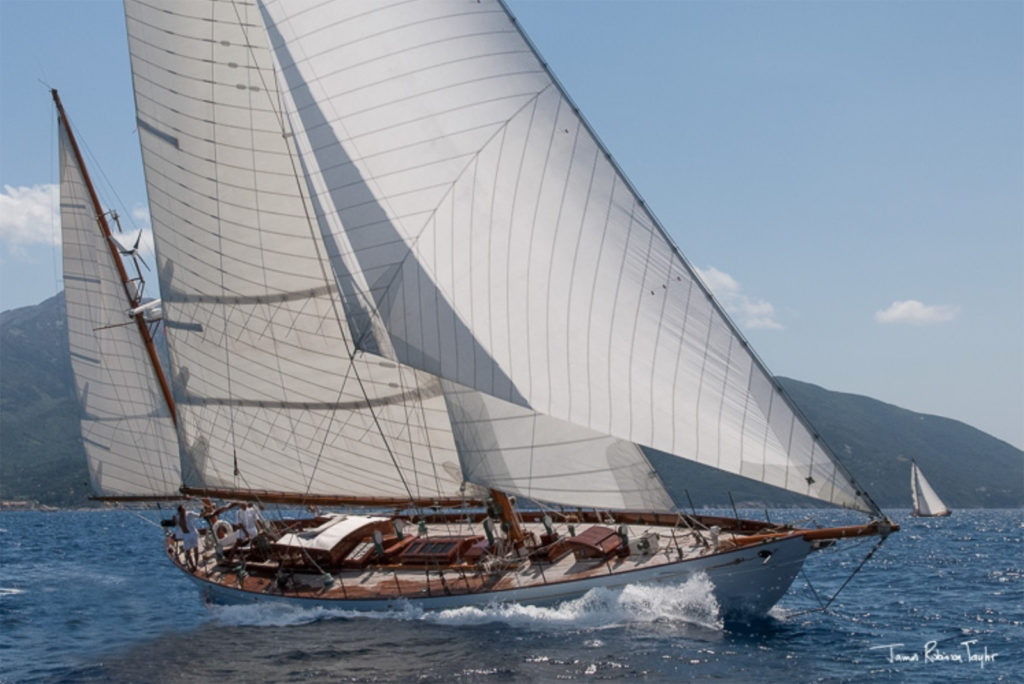 Designed by William Fife III at the peak of his powers in 1936 – not only has LATIFA been widely regarded by yachting luminaries to the present day as the best of all his designs, but the great man himself considered her to be his finest.

Mere mention of her name imparts a legendary tone to any yachting conversation and as one of Fife’s last designs kept one foot in the past while putting the other firmly in the future. Second in the 1937 and ’39 Fastnet Races she had a class win in the first post war race in 1947.

Thoroughly, sensitively and immaculately restored, LATIFA is strong with up to date systems and equipment and sensible accommodation for long distant cruises in great comfort. In her current ownership LATIFA’s special capabilities are marked by achieving 12 single handed transatlantic crossings and a two year global circumnavigation with her owner’s family as crew. It is a very special 70 ft yacht from any era that can be sailed by one man alone!

Deciding on what constitutes the perfect yacht is only marginally less likely to end in a fracas than deciding on the perfect woman but at least there are some likely points on which to agree. That she’d be fast and stunningly beautiful go without saying, and she – the yacht this is – would have a history: some ghosts with which to share your quiet evenings aboard.

She would, of course, be from a great designer, let’s say, William Fife, and perhaps be a favourite out of his illustrious catalogue. Performance-wise, it would be nice if she could be sailed solo or short handed with the family but of course she’d have to be able to win trophies at the famous regattas and races around the world. She’d be built from the best materials, and would it be too much to ask also for her to have an impeccable maintenance history – to have been owned by the same knowledgeable, besotted owner for the last 40 or so years? Well if that’s the wish list then the yacht is LATIFA.

Designed by Fife III at the peak of his powers, in1936, to a far freer set of criteria than the Metre Rule allowed, she combines all the above luscious attributes and more besides. Not only is LATIFA widely regarded by many of today\’s yachting luminaries as the best of all Fife\’s designs, but the great man himself believed her to be his finest – such was his own affection for the yacht that the Fife family assimilated a model of LATIFA into the memorial produced on his death in 1944.

“A great delight to lovers of sailing vessels, for she is one of the loveliest of sailing craft yet seen, and I can see her now smoking up through the Solent with a north west breeze over her quarter, everything set even to the mizzen staysail, and all her cloud of canvas seeming to lift her out of the water’. Uffa Fox on LATIFA 1937 from the book Racing, Cruising and Design.

It can only be imagined how, in 1936, the already world-renowned William Fife III sat down to draw, without the constraints of the ostensibly inshore racing rules intended to develop the thoroughbred racing yachts on which he had made his reputation, laying all his considerable talents and knowledge on the table to produce an altogether more substantial, stable yacht to an ocean racing rule that produced sea kindly, long legged, easy handling craft. Perhaps he already saw the writing on the wall – the Second World War was looming and advances in materials would allow a new generation of young designers to develop techniques and materials that would transform literally the shape of yacht design. Could LATIFA have been Fife’s message to a future generation of yacht designers? DORADE was already six years along her path into yachting legend and surely the great man, at the age of 79, could sense that his influence would have dwindled by the end of hostilities.

But this is mere wistful speculation, having in her infancy come second in two consecutive Fastnet Races, LATIFA’s special capabilities are quantified by her achievements in her current owner\’s time in charge: 12 single handed transatlantic crossings, a two year global circumnavigation with his family as crew; winning Class 1 at the Fife regatta in 2013 against such august racing classics as ASTOR, SOLWAY MAID and KENTRA and winning the Concours d’Elegace at Antigua Classics 2001 and 2011. LATIFA is very much a yacht with which to dream and then to achieve.

Yesterday off Ardlamont – the south-western tip of Argyll’s Cowal Peninsula – during The Fife Regatta’s thrash from Tighnabruaich to Portavadie, we saw the real LATIFA come alive, full and by, as William Fife Jr. must have visualised this exquisite – some would say the finest – example of the functional art that flowed from his drawing boards and models, through his Fairlie boatyard to the firths, seas and oceans. Fife was 79 when he designed and built LATIFA as an ocean racer. She never stops.

Aboard today, she looks every inch the Fife dream yacht. When the current owner found her 37 years ago, he immediately undertook a major restoration at the Beconcini yard in La Spezia, Italy under his own close supervision. As well as required maintenance work commensurate with her age, adjustments were made to swap her bulky engines for a more suitable and compact power source. Today she is fitted with twin 50 HP Kubota engines driving contra-rotating Max Prop propellers and each engine is capable of charging her bank of house batteries. The space that this rationalisation freed up has been incorporated into her interior and she now has a saloon befitting a yacht of her size and status, as well as boasting a library and three double cabins.

Along with the extensive interior refurbishment and structural maintenance, including a new deck, LATIFA\’s rig has been restored to that from her original drawings – a low aspect, three headsail yawl. And such is the current owner\’s passion for hands-on sailing, that small upgrades have been made to the equipment and running gear to make short handed and solo sailing not just a viable option, but something that he does on a regular basis.

“Of all the great yachts that have broadcast William Fife III\’s reputation beyond his lifespan, it was a representation of LATIFA that his surviving family chose to form part of his memorial. For it is her likeness alone that sits, at their behest, as the wind vane atop the Fife family\’s tiny parish church in Fairlie, Scotland.” Martin Smith

The allure of LATIFA has been remarked upon by many of yachting\’s great commentators since her launch, but no-one could put it more movingly than her current owner: “The moment I saw her and set foot on deck my heart missed a few beats as I knew, beyond any doubt, that our destinies were linked. As a trained architect, classical art lover and collector I was immediately captivated by her utter beauty, by the harmony of her lines and the right proportion of every detail. In LATIFA there is that very rare, almost magical Fife combination of power and grace.”

← Osborne of Wight
Solway Maid →
We use cookies to ensure that we give you the best experience on our website. If you continue to use this site we will assume that you are happy with it.Ok