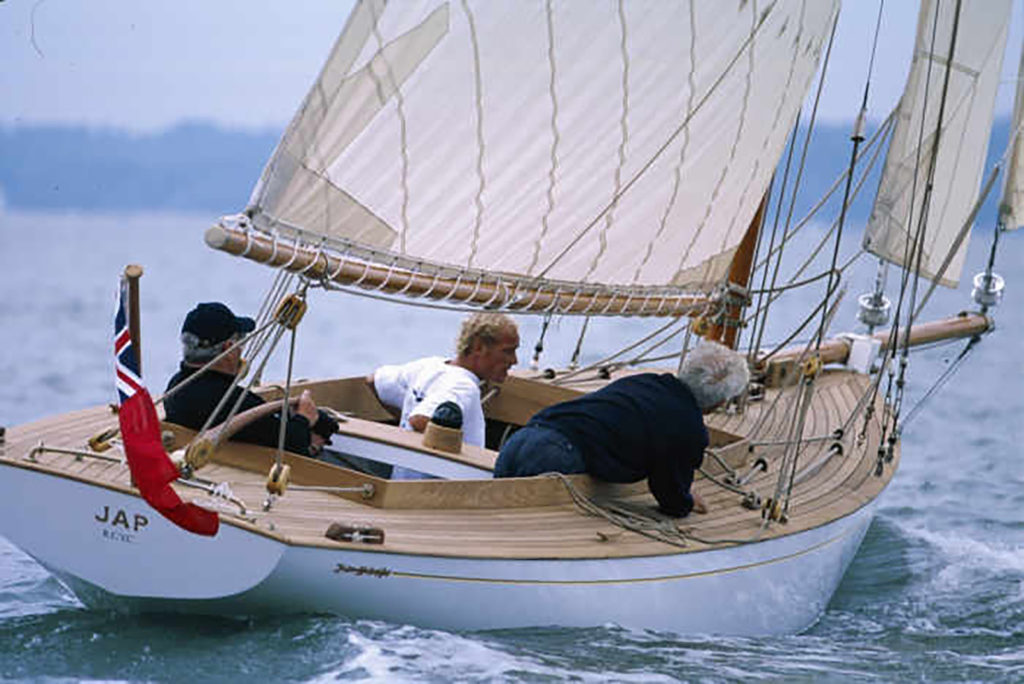 The Cork Harbour One Designs were first commissioned by six local sailors for racing evenly and without handicap. Within months of the first series the competition promoted further interest and four more were commissioned. JAP was the ninth to be built, accepted into the class in 1897 and the yachts raced seriously until the 1950s. Seven of the boats survive to this day.

A racing yacht is designed to achieve maximum speed through the water – it combines the purest aesthetics, the most durable of materials and a “je ne sais quoi” – collectively these are the qualities which intensify the mathematics of a perfect hull. JAP is the diminutive, but feisty, Cork Harbour One Design built in 1897, conceived with all such attributes in mind. Built to the renowned specifications of William Fife III and commissioned by a Cork “Justice And Peace” the late nineteenth century Irish term for what we would know today as a Justice of the Peace. Hence we have the solution to a name which seems distinctly alien to the late nineteenth century soft colloquials of Maureen, Elsie, Sybil & Colleen.

Alicia St Leger’s history of the Royal Cork Harbour Yacht Club writes of P.F. Donegan, an early pioneer of the Cork Harbour One Design, describing how “towards the close of the season of 1895, the idea of forming a new class of inexpensive type of boats was discussed”.

An informal assembly of yachtsmen met at theImperial Hotel, in Southern Ireland to consider the idea. One Design Classes were being constructed on the Clyde and on Belfast Lough at the time. Other designs, such as One or Five Raters were deemed either too expensive, too big or too small. A boat capable of taking four up – a relatively easy number to assemble – that could be built for around £100 would, it was thought, be a feasible solution. A meeting was later held at the Victoria Hotel, Cork where the idea was debated in detail with the result that a syndicate of five was formed, one of whom was Adolphus Fowler, who commissioned JAP in 1897. Fowler held the title of Justice And Peace – an acronym which seems to suit JAP to a T. JAP is today a thing of beauty – to sit quietly in the simplicity of her deep nineteenth century hull there is indeed a feeling of peace – the combination of honest material, fitness for purpose and pure integrity seems to characterise her ‘justified’ design.

St Leger writes that this One Design proved to be “the strongest class racing in the harbour up to the First World War and for many years afterwards.” Fashions in boats, like everything else, change; by the late 1980s JAP was lying abandoned in a mud berth in Cornwall. She was bought by Paul Kingston in 2001 and subsequently by Clayton Love III, the enigmatic Commodore of the Royal Cork Yacht Club from 1968 to 1971, and past President of the Irish Yachting Association (now the Irish Sailing Association). Clayton had JAP restored to her original gaff rig by Fairlie Restorations on the Hamble. JAP had a successful first season in the Mediterranean gaining a second on her first outing at the Imperia Regatta, a first overall in St Tropez and a second in the prestigious Voiles de St Tropez. Clayton’s ownership of JAP was to set the tone for her future successes.

JAP now combines her ecological credentials with winning ways. She is economical to maintain being only 30 ft overall, and post her extensive high quality restoration requires only routine maintenance. She has her own habitat – her home is a modern Sea Cell 11 transport container – with a sustainable bamboo floor. Buckets of sea water keep her moisture levels at a constant, her solid oak mast, her equipment, natural hemp ropes, and spares, are stored alongside her in the container. It’s a neat solution ingeniously devised by Clayton Love.

JAP has subsequently morphed into a modern phenomenon which is transportable around the world. Made of 100 natural materials – oak, English elm and pine – she has the finest of pedigrees, and sports the synonymous red and gold Fife Dragon emblem to her bow. With the prettiest of sail formations she carries over 600 square feet of sail, using only the elements of wind and water for her speed. There is not a cloud, nor an element of pollutiontoher.

Under David Sherriff’s ownership she has achieved outstanding successes. It is believed that JAP is the only boat ever to have won five straight races of the Classic Regatta in Cowes TWICE – in 2012 and 2015. Sherriff is the proud owner of not one but two Panerai watches. So popular was her first win in the Classic Regatta of 2012 that on the final day of racing, this smallest and oldest of the Classic fleet was serenaded out to the start to the cries of fellow contestants shouting “Go JAP Go!”.Crew members are sometimes lucky enough to be given the coveted JAP Jacket. In St Tropez (2014) where she came second in her class in the Voiles de St Tropez JAP was given the honour of leading the contenders of the Gstaad Yacht Club annual race out into the bay, as the oldest and smallest of the Classic fleet. Sherriff, whose life is water and boats (he was responsible for bringing about the Redgrave Pinsent Rowing Lake at Caversham, the headquarters of British Rowing, and was the 10 % enabler for the project) brings her out to play occasionally.

← Ierne
Sayonara →
We use cookies to ensure that we give you the best experience on our website. If you continue to use this site we will assume that you are happy with it.Ok