Fairlie, the dwelling of the three Wizards

“Fife [Jr.] produced some beautiful work… masterpieces of thoughtful design and perfect workmanship… such structural excellence… The Fairlie yard never turned out finer work, nor for that matter did any other yard.”

In colonial times ships heading towards or out of Glasgow, the largest seaport in Scotland, would often anchor in the stretch of water between Fairlie and the facing Great Cumbrae island; inward bound ships were forced to wait for the tide to rise before being able to sail. William Fife I, founder of the boatyard, then a teenager with excellent carpentry skills, built himself a small rowboat with which to draw close to the anchored ships that so captured his attention. The boat the young lad had made was so well-built that there was a buyer for it before it was finished. Then he built himself a second boat, which he also sold immediately.

Fairlie is a name indelibly associated with some of the most magnificent yachts ever built, due to the William Fife & Son boatyard which occupied a stretch of its beach for almost a century and half. Fairlie’s geographical location, on the Firth of Clyde, which upstream turns into the River Clyde and is the waterway into Glasgow, may have something to do with the greatness that the Fifes brought to yachting through the fishing village where the boatyard was established. 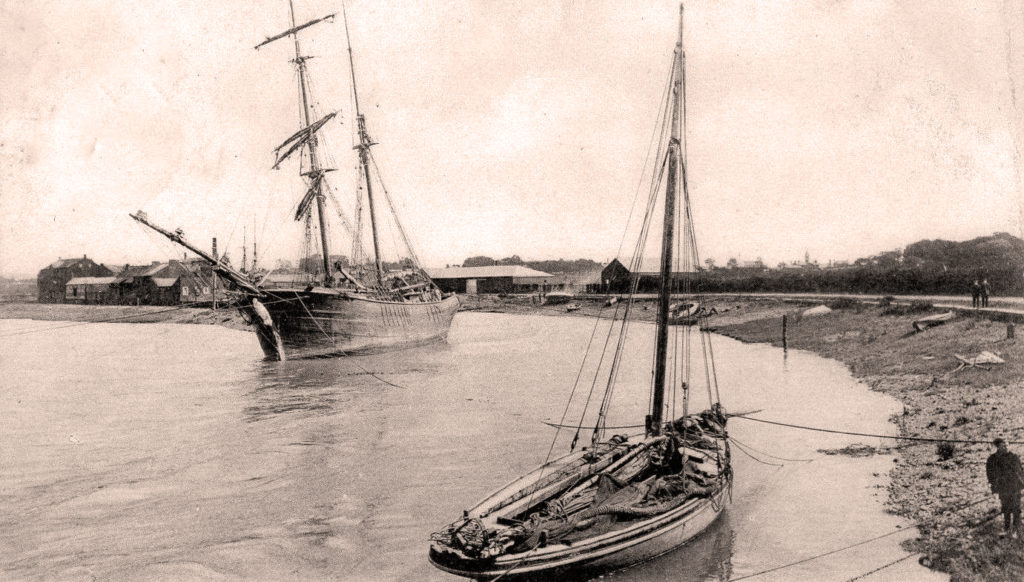 It was so that the 18-year-old William decided to leave his job on an estate belonging to the Earl of Glasgow, and for one shilling a year rented a small plot of land on the beach of Fairlie from the latter and set up shop building boats. Thus, in a fishing village difficult to reach by land, with a population of 140 souls, was one of the most famous boatyards in yachting history founded in 1803.

In the first decades the shipyard had no infrastructure other than hand tools such as hammers, axes, adzes, saws and augers, with no covered areas and boats being built under the often not-so-blue sky. The only facility was a blacksmith’s forge nearby. After a few years a storage shed and a steam box for bending planks were added. 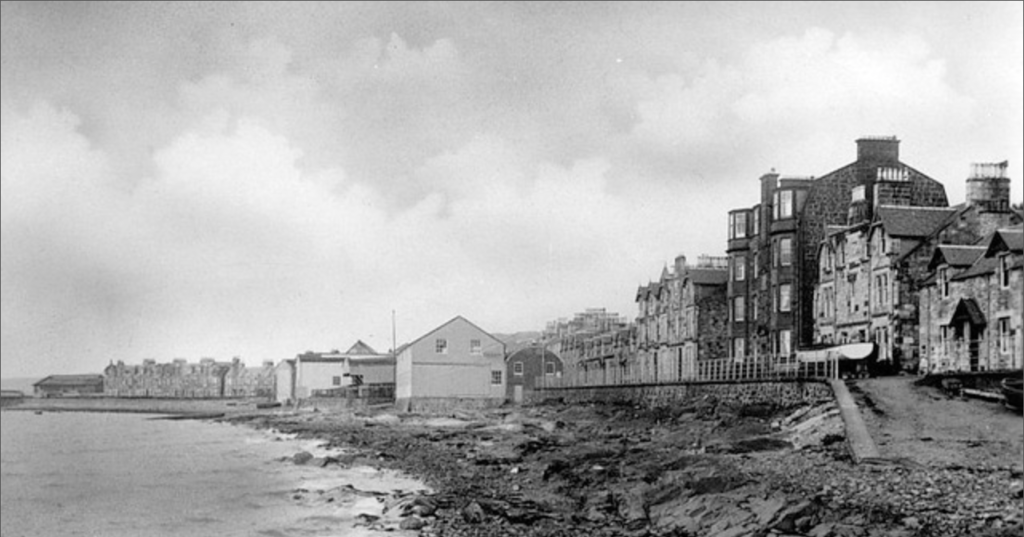 Nevertheless, not even a decade into business, the boatyard was able to produce the 50t Lamlash, dubbed “Big Lamlash”, which would make its way to the Mediterranean, and two years later, in 1814, the first and last paddle steamer it would make, Industry. Both were a big success, but the boatyard under Fife I would rarely venture beyond building fishing smacks and light coastal trading vessels.

Yet the owner’s and boatyard’s reputation flourished, the smacks, known as “Largs Yachts” were reported as being the fastest in the area, and, as a testament to Industry’s solid build, she went on to be the oldest steamer in the world and was dismantled 80 years after she was launched only because her design was obsolete. 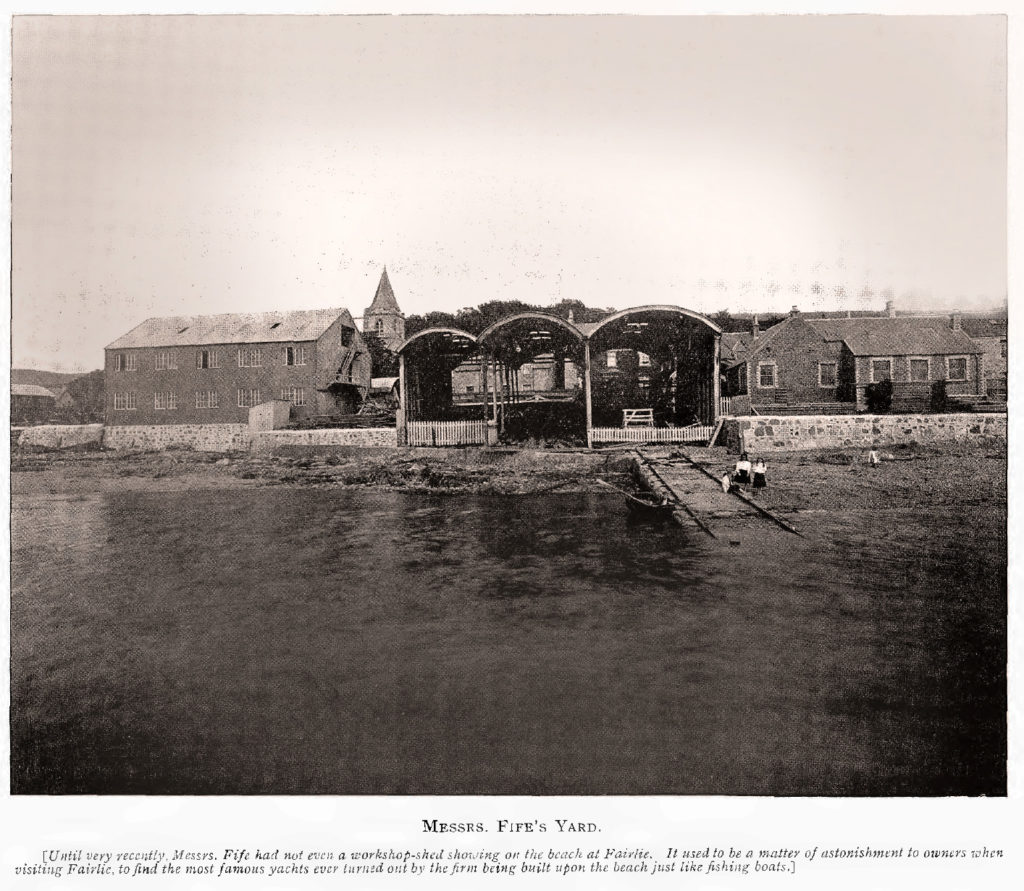 Fairlie had been a fishing village, but with the gradual expansion of the Fife enterprise more and more fishermen stowed their nets and headed for the boatyard, which would become the village’s main source of employment until its closure after World War II. As such, life in the village was tied to the yard’s schedule; after the 1850’s, when the yard focussed once and for all on yachts for the well-heeled, the boatyard’s production season ran from Fall through Spring. Summer was dedicated to racing, and boat owners took aboard many of those who had built the vessels, valuable crew who knew every nook and cranny of the boats, their limits, and how to push them.

When the founder’s firstborn and namesake took over the yard’s management in 1840, it started changing course as the latter had a predilection for yachts over smacks, and the opulent times were ripe for it. The turning point came in 1848 with the 40t cutter Stella, the first yacht on which the boatyard made a significant profit. Most importantly, she was success on the racing circuit, followed in 1852 by the cutter Cymba which consolidated Fife’s reputation at a national level, thus giving way to a steady a stream of yacht orders. With this, Fife was able to dedicate the boatyard entirely to building yachts, luxurious racing machines of unparalleled build for the affluent. In 1865 came Fiona, the unbeatable 80t “Fawn of Fairlie”, bested by the smaller Bloodhound built in 1874, just to name two of the better-known winners built at the boatyard under William Fife II.

However, the shallow waters of the Fairlie shore made this an unsuitable place to build large yachts, and these required a pontoon to be launched. This was a factor that influenced the finances of the boatyard; one significant source of income for boatyards was the maintenance of large yachts, which was precluded to the Fife boatyard. It was not until William Fife III created a slip in 1895 capable of launching 19 metre rating yachts that this became a viable option for the boatyard. Overall success warranted further investments in the yard’s infrastructure. 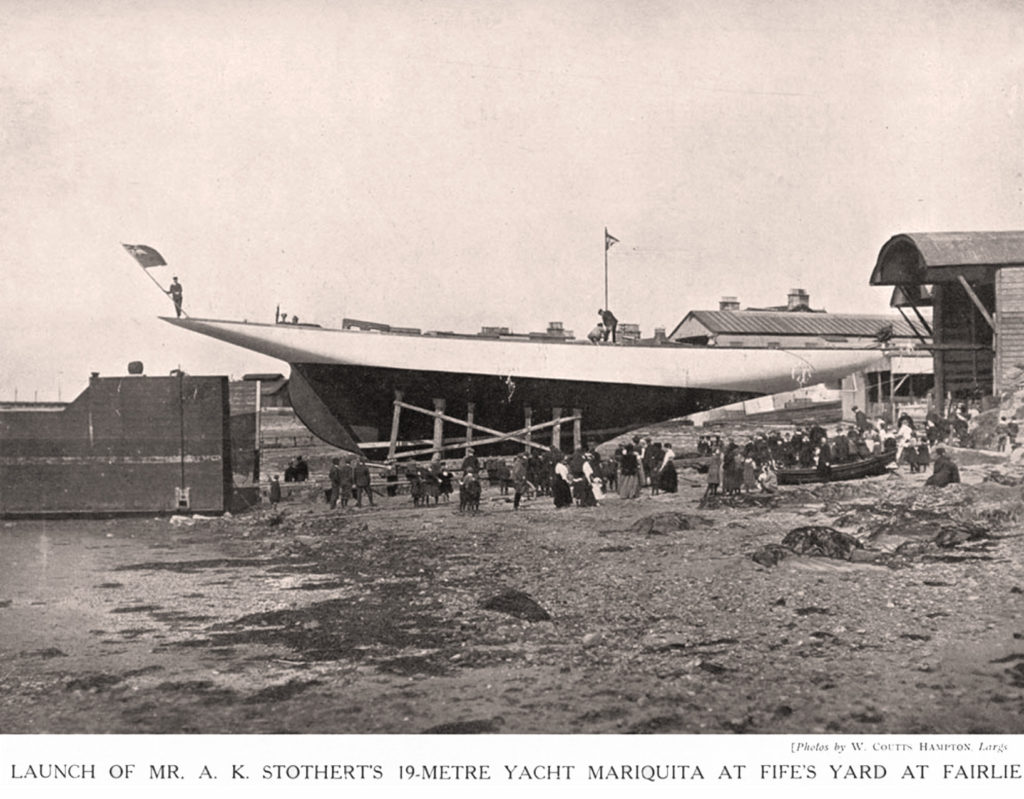 Nevertheless larger yachts had to be built elsewhere in Britain and abroad; Fairlie produced the smaller classes. The largest yacht to be launched at Fairlie was the 135 ft Cambria in 1928.

The third-generation William Fife, who brought international fame to the name, introduced mechanization and scientific methodology to the yard and by the time he took over the management of the company in 1894 the Fairlie boatyard was building more than 20 yachts per year. By the time William Fife III’s father died in 1902, the yard had significantly expanded since its foundation a century earlier. The production area was now completely covered and illuminated by acetylene gas lamps, with machinery for woodworking and forges for founding iron, brass and lead.

Under William Fife III, as capable a manager as he was a designer, the Fairlie boatyard was able to deliver a custom-designed racing yacht of 70 ft within two months from the time of order. Considering the superlative craftsmanship and outstanding finishings that characterized Fife yachts, it was an admirable feat, even by today’s computer- and machine-driven standards. However, demand in those years often exceeded the yard’s capacity and production often had to be outsourced, without ever relinquishing Fife’s highest standards. 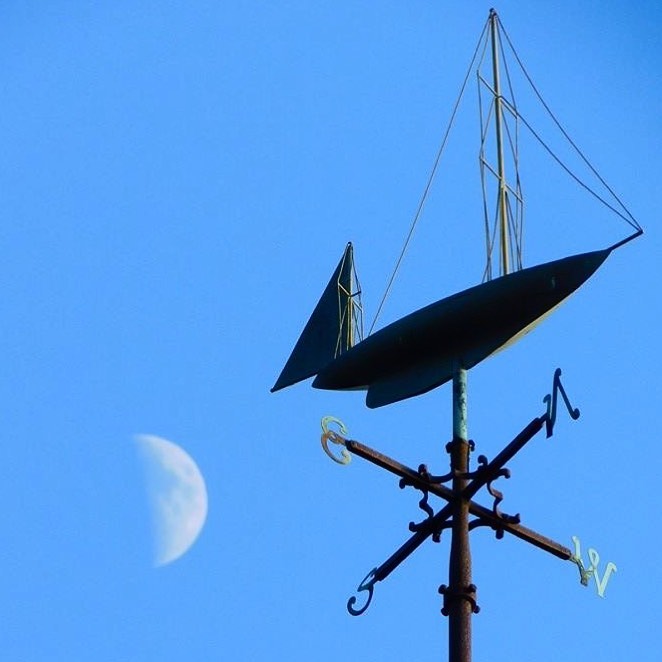 With a lapse during the first World War, the Fairlie boatyard thrived until the beginning of World War II, during which the Admiralty took over the yard. In the last two decades the active management of the yard had been passed on to Fife’s nephew, Robert Balderston, whom his uncle had made a partner in the company in 1919, and who subsequently added the name Fife to his surname.

Three years after William Fife’s death in 1944, the yard was bought and renamed Fairlie Yacht Slip under the management of Archibald MacMillan, but the yard’s fortunes declined thereon, and it closed in 1985, the land sold to a development company that demolished it. The Scottish Maritime Museum was able to salvage some tools and part of the archives.

The only reminder of the boatyard that remains in Fairlie is the “Latifa” weather vane atop the church’s steeple, a

tribute to the Fifes, the so-called “Wizards” of boatbuilding, their boatyard and its craftsmen, which together brought fame, fortune and glory to this little fishing village with their “fast and bonnie” vessels.

For the sources, please, refer to the the Bibliography.

We use cookies to ensure that we give you the best experience on our website. If you continue to use this site we will assume that you are happy with it.Ok