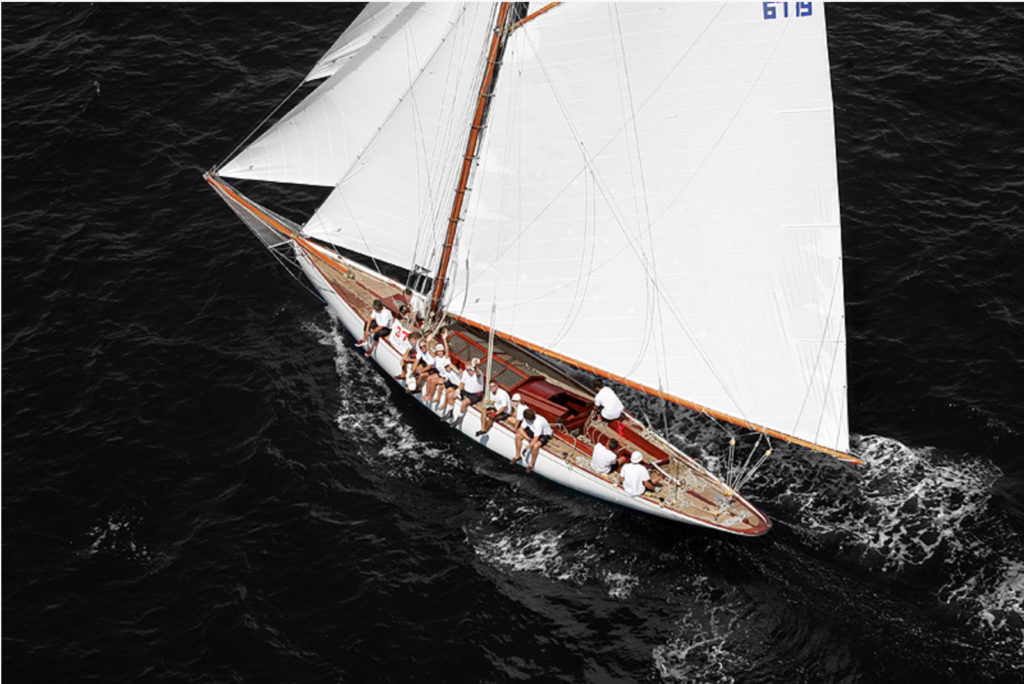 Of the same dimensions as an 8 metre international, EVA was designed by William Fife III in accordance with the regulations of the second Linear Rating Rule, the last yacht built by William Fife & Sons under this formula. In 1906, the year of launch, the International Yacht Racing Union – IYRU was founded and the international metric ruling was formulated and adopted permanently in 1907.

In fact, the three yachts sharing these dimensions launched in 1907 by William Fife & Sons, are the 8 metre internationals – LILIAN II, SORAIS and Y A VEREMOS; this last yacht under the charge of Sr. Don Enrique G. Careaga.

EVA is the third yacht built from William Fife III’s initial design. The first was CARMEN (design No 489) build by Jensen in Norway in 1902. The second was NINIA (No 498) also built by Jensen in Norway with a leaden keel, in place of a cast-iron one, as with CARMEN.

In 1903, William Fife III, satisfied with the design, put the finishing touches to it, reducing 1 ton of ballast and increasing the flotation length from 27 ft. 7 in to 28 ft 6 in, virtually anticipating the first 8 metres international.

In the hope of a buyer coming forward, he decided to start construction in 1904. Fife’s great-niece May Fife Mc Callum, keeps a shipyard worker’s manuscript, recording the boats on which he worked; including EVA in 1904.

In 1905, F Glenn Mac Andrew, of Knock Castle Largs; very near the shipyard, whose family were at that time the owners of the then well known company, Mc Andrew Shipping Line, took ownership of EVA.

In 1906 she was launched, starting her life in regattas on the Clyde, under the pennant of the Royal Northern Yacht Club.

Her successive owners were:

1913 – 1938 Mr Robert Graham, resident of Greenock and member of the Royal Clyde Yacht Club, who changed the name from EVA to VALORA.

1939 – 1946 Mr Peter Simpson, resident of Hunter’s Quay and member of the Royal Northern Yacht Club, changed the gaff rigging to Bermudan, removing the bowsprit. He substituted the male mast and topmast for a single mast of greater height and on it, he installed two bronze winches. He kept the name VALORA.

1953 – 1958 Brothers; Robert and John Dunlop-Urie, sons of the previous owner.
John was a pilot in the Battle of Britain and Commodore of the Royal Northern Yacht Club.

1969 – 1971 Commanders A J H Goodwin and V M Lake, both members of the Royal Northern Yacht Club, continued with the name VALORA.

At this point, EVA finished 69 weekly regatta seasons on the Clyde, in which a Linear Rating Rule, turns out well placed against the 8 metre international cruiser racers, according to the comments of Mr Cargill Sandeman, the 85 year old cousin of the owner from 1959 – 1969 and then the only remaining living crew member.

1998 – 2001 Sr Don Jose Sanches Abril, resident of Malaga, acquired VALORA in a sorry state, with the intention of returning it to its original condition. He transferred it to the shipyard of Don Juan Francisco Sanches Alcaraz, ASTILLEROS MEDITERRANEO, Malaga. Another project, the BARBARA, a Camper Nicholson from 1923 more suited to his needs for family cruising, forced him to put VALORA on the market again.

2001 – date The present owner bought VALORA, being assured of the services of Sr. Don Juan Belliure as director of the project, contracts Astilleros Mediterraneo to carry out the restoration work. With Juan Sanchez Alcaraz heading the team in the shipyard, he carried out this task alongside master carpenter Rafael “Elcano”.

← Emily
Ierne →
We use cookies to ensure that we give you the best experience on our website. If you continue to use this site we will assume that you are happy with it.Ok