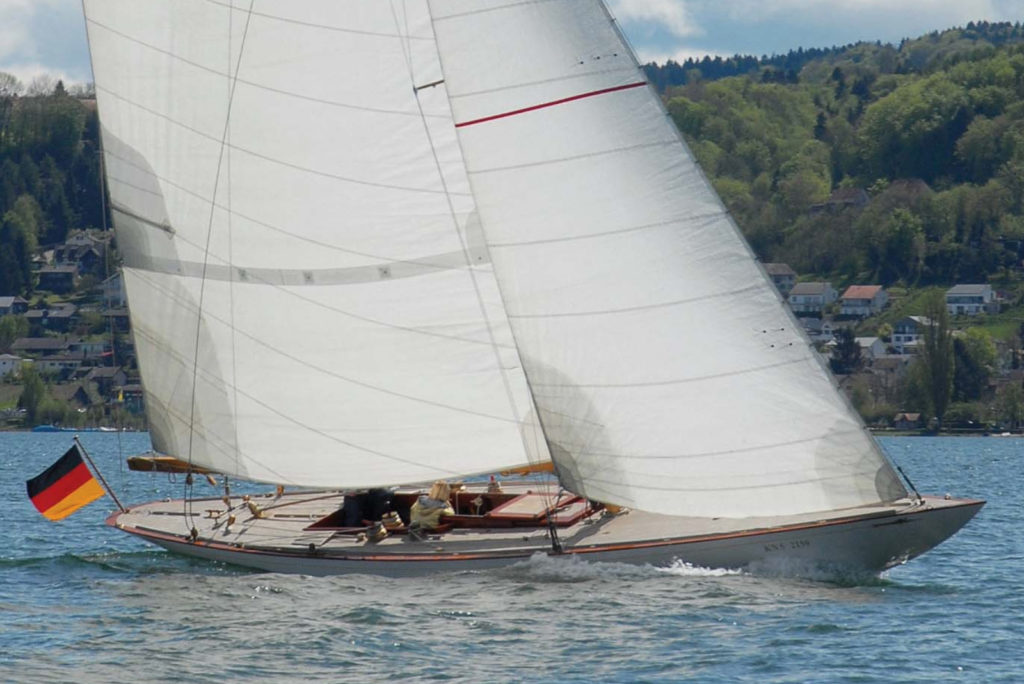 In extolling the virtues of this class generally, it’s hard to improve on the opinion of Uffa Fox who some 10 years after EMILY’s launch was to declare:

“The owner can sail his Eight Metre round the coast from regatta to regatta, for coastal cruising would give owners the two most sought things in life; health and happiness, for without doubt sailing at sea brings peace to the mind, and the clean salt-laden air health to the body; which are both needed by all in this mechanical age of irritating noise and poisonous fumes. The Eight Metres are very popular, for in the cabin an owner can live, or simply change his wet clothes after a hard race and eat his lunch in comfort according to his ideas of pleasure. Added to this there is the protection the cabin gives in bad weather, for then it seems to make what otherwise be a boat, a ship.”

Such virtues are – most of them – equally applicable to her lakeside domicile in continental Europe. Added her classic provenance and the continuing popularity of racing in this class to the present day is what doubtless inspired the comprehensive restoration of EMILY to this fine example of the genre.

EMILY was designed by William Fife III and built for Sir Ernest Roney at William Fife’s yard in 1924 as an International 8 Metre racing yacht (Int8mR) to the second international rule – with the French Olympics uppermost in her owner’s mind. British Eight Metre champion in 1924 and, beating BLUE RED – Charles Nicholson in the selection trials, EMILY took the Silver medal for Great Britain at the Olympics in Le Havre.

Fast forward – from a state of considerable decline EMILY was totally and traditionally rebuilt during 1998 99 to original plans by David Vieira’s yard near Lisbon, sporting a long boom but small foresail rig, rare flush deck and is once again a pure classic racer. Sea trialling during her reappearance at the Europeans in 1999, EMILY was winner of the Concours d’Elegance with other eights such as ARIA, BAMBA and CARRON II sailing in the Coupe Cartier. She is maintained by Josef Martin, of the Radolfzell Boatyard by Lake Constance / Bodensee.

← Elise
Eva →
We use cookies to ensure that we give you the best experience on our website. If you continue to use this site we will assume that you are happy with it.Ok