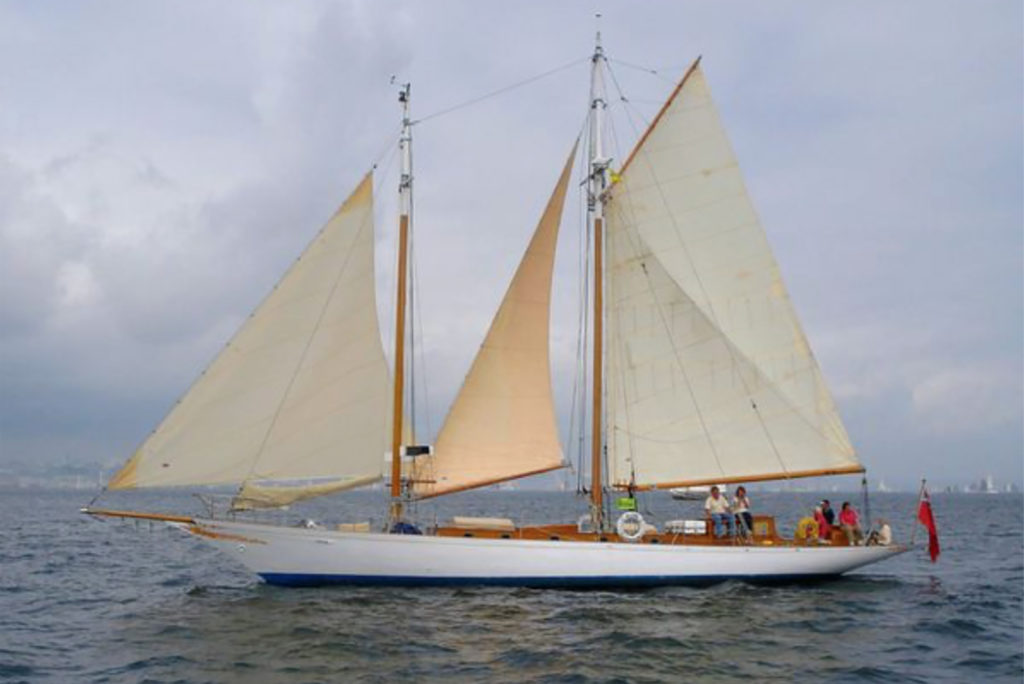 Elise was built on the Clyde in 1912 by William Fife III to his own design No 601 as an auxiliary gaff schooner with a Gardner two cylinder paraffin engine. She was commissioned by a Mr WA Young of Paisley a member of the Royal Clyde and Royal Northern YC. Although her war history is unknown, Young was her owner until 1919. At this time she was sold to a Carl Ruben of Copenhagen who kept her in Baltic waters. In 1922 she was repatriated by Sir Alfred L Goodson Bart of Brixham. He was succeeded by numerous different owners, bestowing a variety of different names including MIMA, SPINA and ELISE OF LONDON. While she seems to have considered most major Mediterranean ports her home at one time or another; around 1979 she was to return to the United Kingdom.

In 1980 as SPINA and found in a dilapidated state, she was bought by retired baker, one Mr Appleyard, who sailed her to Salcombe harbour with the intention of rebuilding her there. He was to die however before he could complete the task and the boat was willed to his son and daughter, who sold the boat to Ted and Bridget Meredith in 1992.

The Merediths pretty ambitiously aimed to complete her restoration in short order before running her for charter. Even more adventurously, the couple decided the best way to guarantee the rebuild would progress at the required pace, was to buy a half share in the local boat yard, Penwill Boatbuilders.

The first step: to remove and replace the interior, led to the discovery and removal of suspect deck beams, which in turn led to the replacement of the entire deck. Working forward, it was then found that the stem was rotted and a whole new section was re-constructed from a grown oak baulk of timber, while at the same time many of the hood-ends were also replaced.

The work undertaken was admittedly major but not mind-blowing for shipwright Dave Penwill, who commented then, with wonderful nonchalance: “Wooden boats are basically just a big kit. You take them apart and fix them”.

As for the interior; the solution achieved by the Merediths suited perfectly their own requirements as well as allowing the vessel to be rated at the highest category, Cat Zero, by the MCA. Berths were for six guests and two crew persons. Most of the remaining interior contained a large, near commercial specification galley and the capacious saloon that allowed a full complement to be entertained in a manner befitting life aboard a distinguished Edwardian yacht. Given what was then to befall the yacht, the feasibility of creating an impressive and useful interior from scratch is most instructive.

Following her re-launch in 1996, Elise’s charter career proved successful; the Merediths providing for enough paying custom on cruises out of Salcombe to France, Scotland, the Med and the Caribbean, to make her pay for herself while they got to enjoy much time aboard for themselves and all the family. All the major festivals were attended, weddings were held aboard and many miles put under her keel by a continuous stream of happy guests. The growing family would fly out to meet the yacht wherever she might be, taking time aboard for themselves. That their entire extended family was able to enjoy a life at sea in some of the world’s premier destinations aboard Elise must surely be one of the greatest perks of the charter business.

Sadly this happy continuum was brought to an abrupt end in January 2010. In short Elise had sunk on her moorings in Douarnenez harbour. Raising her would require careful planning – and in due course a local diving contractor under appropriate supervision brought her to the surface, the shipyard representative immediately identifying failure of a cockpit drain cock as the cause of the sinking.

Although the cause might have been rectified at a cost of a few pounds, the damage throughout the boat was then severe. The electronics and soft furnishings were ruined. The wooden panelling of the interior would need much work to restore its former glory, not to mention replacement of the engine, ancillaries and much else – in insurance terms she was a write-off and future charters would have to be indefinitely postponed.

Once the insurance aspect was sorted out, the yacht was repatriated to the UK where she has been installed within a purpose-built shed ever since. Today she sits; her hull stabilised and partially stripped, safely cosseted in her own dedicated shed surrounded by the trappings of her working past.

← Sibyl of Cumae
Emily →
We use cookies to ensure that we give you the best experience on our website. If you continue to use this site we will assume that you are happy with it.Ok