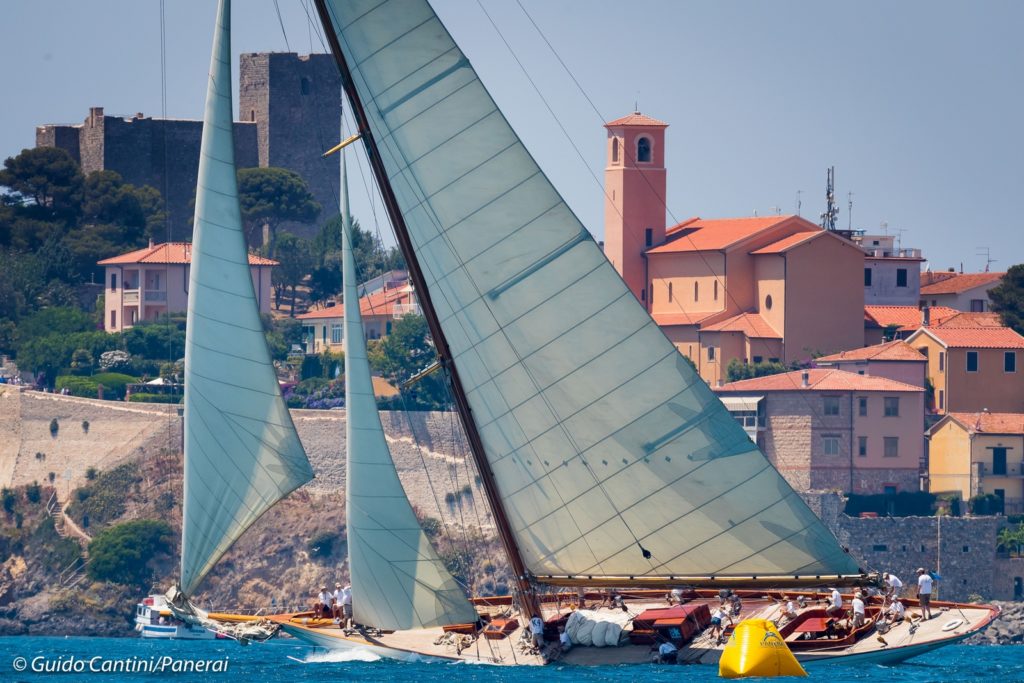 Launched in May 1928 Cambria was the first of a new generation of Big class cutters. Finally after years of racing a mixed class of yachts under an unsatisfactory handicap system there was an attempt to create a new harmonious Big Class. The years of austerity that followed World War I were over, the rating rules were well established and both Sir Mortimer Singer and Sir William Berry commissioned new cutters. Singer’s Astra was designed by Charles E. Nicholson and built by Camper & Nicholsons, Berry’s Cambria was designed and built by William Fife.

There could not have been a greater contrast between the owners of these two new cutters. Singer was an established yachtsman from a wealthy family trading up from the 12 Metre Class, Berry was a newcomer and as such relied on the advice of experts. First among these was Brooke Heckstall-Smith, secretary of the Yacht Racing Association and editor of Yachting World magazine, one of many titles in Berry’s media portfolio.

Sir William Berry’s rise to prominence is one of the greatest rags to riches stories in the media and it is all the more so since he was one of only a handful of 20th Century newspaper owner-editors. Leaving school at 13 he was apprenticed to a weekly newspaper in Merthyr, South Wales, six years later he moved to London. With a capital of 100 pounds he single-handedly edited, collected advertising and distributed his own magazine, within a few years he had secured a foothold in the publishing industry. In 1915 he borrowed money to buy the moribund Sunday Times and became its editor in chief. This was the start of phenomenally successful period of empire building. Within a few years he had acquired the Financial Times from Sir John Ellerman, The Hulton Press from Lord Rothermere and the Amalgamated Press (magazines) from the executors of Lord Northcliffe. These were followed by the purchase of the largest newsprint manufacturer and the ailing Daily Telegraph from Lord Burham by which time Berry had created the largest media empire of the time.

With business came a social position, – a baronetcy and later his elevation to the rank of viscount – and the formation of one of the great British collections. Berry had tremendous taste, he bought avidly and eclectically; Old Masters, British pictures and furniture, oriental carpets, porcelain, glass and silver. The world began to take notice in 1927 when he bought van Dyke’s Portrait of Abbe Scaglia, one of the artist’s finest works. In 1935 he bought Hackwood Park from Lord Bolton to house his collection and it remained there until dispersed on the death of his son, the 2nd Viscount Camrose, in 1998.

It was in the midst of this whirl of collecting that Berry ordered Cambria, famously asking his wife if she too might like a similar yacht, an offer she declined. Success in yachting would bring an altogether new prestige: King George V dominated the Big Class with his Britannia and to enter this peer group Berry needed to be prepared. Heckstall-Smith was ideally placed to advise him on the choice of designer but was far from impartial since he and Charles E. Nicholson had crossed swords several times over rating rules, Alfred Mylne would have been a gamble so Heckstall-Smith directed Berry to William Fife. Fife was a safe bet and eager to secure so prestigious an order. When contracts were exchanged on 1 August 1927 Fife was forced to write to Berry conceding, ‘that it is a term of the bargain that the specification is subject to such reasonable variations I may agree with Sir William Burton, acting on your behalf, without variation of price.’ Burton was another of Heckstall-Smith’s appointees, he considered him ‘the greatest master of sailing a plain level match’. Certainly Burton’s credentials were immaculate, he had dominated the 52 foot, 15 metre and 19 metre classes with his own yachts and helmed Shamrock IV in the 1920 America’s Cup.

With trials completed on schedule Cambria made her racing debut in Harwich at the first event of the 1928 season. It was a close race and she won setting the tone for what Berry would expect from then on. Cambria, like Astra, was built to the Second International Rule and had to rate between 21 and 24 metres and a time allowance to settle any differences. Had the class been limited to these modern Bermudan rigged yachts it would have worked. However, by necessity the class had to include the King’s Britannia, built in 1893 and still gaff rigged, the old rule 23 metre class yachts Shamrock and White Heather of 1908 and 1909, the one off cutter Lulworth and the schooner Westward. It was a rating officer’s nightmare and the racing was far from equitable.

Most significant amongst the problems that afflicted the new yachts was a limitation imposed on mast height and Cambria, built to the upper size limits of the class, was particularly handicapped. Burton steered immaculately but, penalised by the rating, the prizes went disproportionately to yachts 10 to 25 years older than Cambria. The atmosphere on board deteriorated and whilst Berry may have retreated to the fully equipped wireless room he had had fitted on board for business purposes, Fife was left to lament that he knew all too well what was wrong.

For the 1929 season Fife designed a new gaff rig to circumvent the undue penalties applied to the Bermudan rig but a late alteration in the rules suddenly allowed a taller mast and the modern rig thus remained. Astra was withdrawn from racing following her owner’s death but the class was joined by a new Nicholson-designed cutter, Candida. The old gaffers still dominated on handicap but amongst the new yachts Cambria led what was in effect a class within a class.

In making his fifth and final challenge for the America’s Cup, Sir Thomas Lipton heralded in the era of the J Class yachts. His Shamrock V outpaced all existing Big Class cutters creating in effect a third class within the Big Class but with this newcomer soon preoccupied with racing in America, Cambria shared honours with the much improved Candida and both dominated Astra now racing under new ownership. However, the British Big Class could not survive in such a fragmented form, the J Class had arrived and finally the older yachts were forced to do what they could to adapt to the new rule or give up. Again King George V led the way converting Britannia to Bermudan rig for the 1931 season but other veterans soon gave up. Of the more recent cutters only the smaller Astra was able to convert successfully.

Sir William Berry had benefited from the advice of some of the most talented and most informed persons in yachting and campaigned his yacht in up to 50 races a year for three years but like many others his efforts fell victim to rule makers that dominated the organisation of the sport. His most enduring contribution was Cambria herself, the supremely beautiful cutter that has never wanted for admirers. By 1934 she had passed into the ownership of Sir Robert McAlpine who renamed her Lillias and on whose death in 1936 she was bought by H. F Giraud.

In Giraud’s ownership the great cutter became a cruiser based in Izmir, Turkey. Well maintained she made regular passages to Pireus for periodic Lloyds Register inspections and though she inevitably fell out of class during World War II Giraud had her reclassified. According to Giraud’s son Turkish Premier Ataturk was a guest on board and she remained in Turkish waters, mainly Cesme, until the early 1960’s. In 1963 she was briefly owned by Belgian, Andre J.M.Verbeck, who soon sold her on to his compatriot Georges Plouvier. In Plouvier’s ownership she began to voyage more extensively and came to the attention of American Michael Sears who acquired her in Marseille in 1972.

Sears embarked on a circumnavigation whose details remain sketchy, a dismasting off the Canaries is rumoured and it was he who re-rigged her as a ketch in 1975. By the time she reached Australian waters, Sears was forced to part company with her. Australian restaurateur Charlie Whitcombe took her over and mothballed her in Townsville near the Great Barrier Reef where she was eventually discovered by yachtsmen Iain Murray, Denis O’Neil and John David.

Cambria’s beauty seduced them, she had survived virtually intact, her deck structures and fittings were still pure Fife and below her original and elegant mahogany interior needed just polish to bring it alive again. In structural terms  the mahogany planking on steel frame hull had partially degraded. In Brisbane 1995, after careful steel repairs and some planking renewed, Cambria was strong again and ready to sail. A new deck was laid over the original and with light new systems she was perfectly in keeping with a fast racing yacht.

John David became the sole owner in 2001 and shipped Cambria to Cowes where she was converted back to the Bermudan rig qualifying for the America’s Cup Jubilee. It was the first time she had raced back in Great Britain since the 1930’s. Mr David was very impressed with the classic yachting scene in Europe and decided to enter her in the Mediterranean Classic Yacht Circuit. She has been an active participant since that time and she was sold to continue a similar agenda in May of 2004. Under the new Ownership and responsible direction and supervision of the new captain and his crew Cambria has received a new mast of Spruce Pine and has undergone a careful refit in a specialized yard in Southampton. She has continued racing against the growing number of classic yachts, regularly outperforming her competitors in measured time, if not in terms of rating. Cambria crossing the finish line as the first boat with her challengers far behind has become a common picture in the Mediterranean contests. Her owner and his family enjoy Cambria, cruising the Mediterranean in between the busy racing schedule.

← Altair
Halloween →
We use cookies to ensure that we give you the best experience on our website. If you continue to use this site we will assume that you are happy with it.Ok