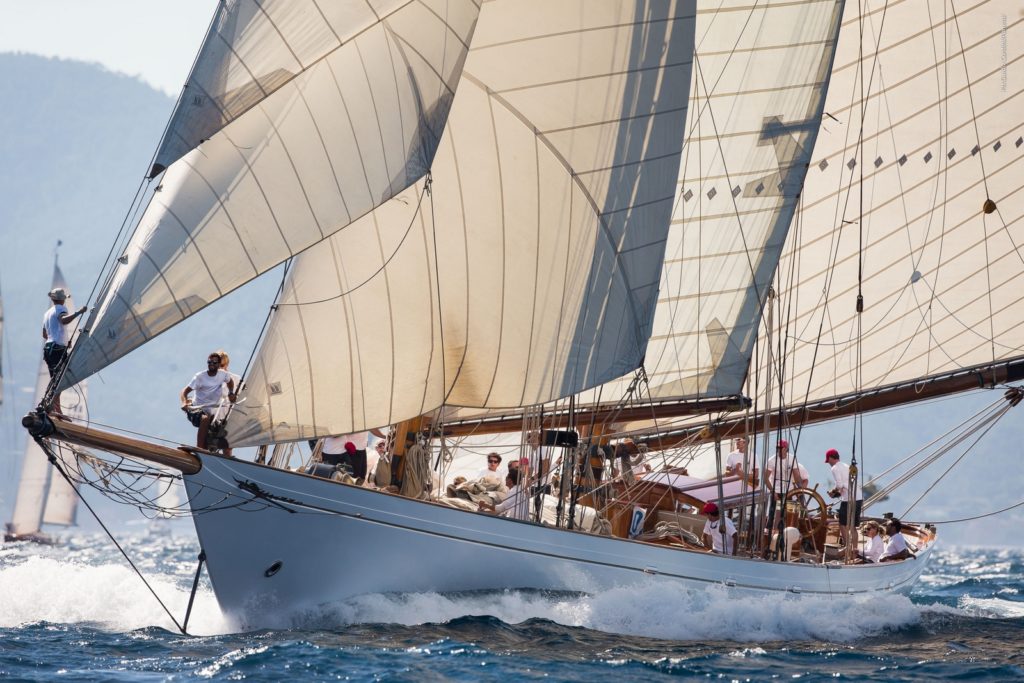 ALTAIR built by William Fife & Sons at Fairlie as yard number 789, was launched in May 1931. She was effectively a descendent of the famous fleet of big yachts that had revitalized schooner racing around the turn of the 19th century – William Fife’s own CICELY and SUZANNE having been notable members of that fleet. More specifically, ALTAIR’s origins lie in her first owner Captain H. MacCaw’ desire for “a sound, safe cruiser; safe to go to the South Sea Islands with no difficulty’ thus expressed in his brief to William Fife in 1929.

In the event the elderly MacCaw never undertook the world voyage he had planned, and after two years of ownership, sold her to Walter Runciman (later Viscount Runciman) Liberal MP for St. Ives. Having sailed her on the south coast of England and west coast of Scotland, he in turn sold her in 1938 to Sir William Verdon-Smith who enjoyed her for two seasons until she was bought by the Admiralty to play her part in the war effort. Post war, ALTAIR was extensively refitted and was to leave British waters under Portuguese ownership passing then to Miguel Sans Mora to be based in Barcelona until acquired by her next owners in 1985. It is largely thanks to Sans Mora’s great love for ALTAIR that during his 34 years of ownership, she was maintained in the tradition of her original build through that difficult period of “old but not yet classic”.

It was new owner Albert Obrist who, with project manager Paul Goss and Duncan Walker committed ALTAIR with almost obsessive attention to detail to the now famous restoration at Southampton Yacht Services on her owner’s insistence on absolute faithfulness to the original design – some of this dedicated and hand picked team would in due course go on to create Fairlie Restorations.

With extensive shipwrighting work complete, her walnut interior was refinished and all fittings including her original heads were restored to working order. Her rig which had been slightly shortened was restored to the full length by scarphing into the original spars. The dyed cream Dacron was developed by sail makers Ratsey & Lapthorn to resemble Egyptian cotton reflecting Obrist’s desire even for the sails to appear original. This was soon copied by other classic yachts.

ALTAIR then acquired by a well known Spanish family, was sold again in 2005 to her current American owner, who has cherished the yacht, doing everything to maintain her exactly as she should be; enjoying Mediterranean and Caribbean seasons with countless regatta successes.

← Mignon
Cambria →
We use cookies to ensure that we give you the best experience on our website. If you continue to use this site we will assume that you are happy with it.Ok